Dianne Taylor Moore is an artist that currently specializes in pastel paintings. She is from Chapel Hill, North Carolina and lives in New Hampshire and Maine.  Her award winning work has been noted for its great energy, rhythm and vivid color. Exaggerated reality is the phrase used to describe her style of painting. Nature and its boldness is the foundation of her work. She has an extremely active exhibition schedule. Dianne received a classic art school education, attending The Maryland Institute College of Art, The School of the Art Institute of Chicago and the University of Illinois. After receiving a Bachelor of Fine Arts degree from The Portland School of Art, she embarked on what was to be a 40 year studio art career.  She has a recorded time line of artistic development through her paintings and exhibition history.

During the years 1980-1990 she produced large format oil paintings of cacti, lizards and wild things from the southwestern United States. These works were juried into exhibits in Az, Co, NY, Ma, Pa, NY, Iowa and NH: winning a First in Show award in Pennsylvania and purchase prizes in New York and Pa. She has been profiled on the NH television series, NH Artist.

In 2000 she began studying in Taos, NM and working outdoors. By necessity this brought about a shift in scale to her paintings as well as her technique.  Gestures became more active and the painting was looser and faster. Studying and traveling became essential for her artistic growth.

Provence 2007 changed her painting forever. During an oil painting workshops in France she discovered pastels. Furiously painting and studying (2007-2015) with nationally known pastel artist, have brought her into a new phase of a successful career.

Her first foray into pastel competition in 2009 brought an acceptance into the Triton Museum of Art/PSWC in Santa Clara, Ca. She has received numerous national wards. Her work may be seen in NHAA in Portsmouth, NH, Northeast Kingdom Artisans in St. Johnsbury, Vt., Wren Gallery in Bethlehem NH and Artistic Roots in Plymouth, NH.   She has participated in the Sunapee Fair, NHAA booth in Mt Sunapee, NH.  2015 brought success in the juried New Mexico Pastel Society’s National Exhibit, taking 3rd place and in the Vermont Pastel Society’s National exhibit also wining the 3rd place award.

To date Dianne Taylor Moore has had eight one person shows. 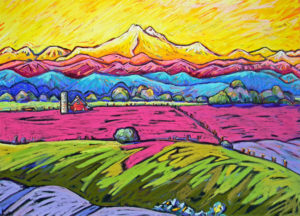