Angela has studied painting in pastel in New York and in Vermont.  In New York she took classes at the Art Students League, the National Academy School of Art and the Pastel Society of America. At the National Academy she worked with Ellen Eagle, a well-known portrait painter who paints exclusively in pastel. In Vermont she has studied landscape painting with pastel artists Robert Carsten PSA, Karen Baker PSA, and Virginia McNeice. She has also studied with Sally Strand PSA and Margaret Evans, both award-winning pastel artists from California and Scotland UK, respectively.

Although she originally worked in watercolor Angela finds that the immediacy and flexibility of pastel, its potential to create astonishingly luminous color and to suggest a broad range of textures is better suited to her endeavor to capture whatever it is that appeals to her about her subjects. She works plein air and in the studio. Angela’s subject matter ranges from landscapes to portraits of both human beings and animals and genre painting. Her work can be seen at the Southern Vermont Arts Center in Manchester VT and on her website at angelaarkwayspastels.com. Angela recently had a solo show of her work at the Spiral Press in Manchester, Vermont. She also works on commission.

Angela was born in Great Britain and has lived in France and Kenya (East Africa). She now lives in Vermont. She has a PH.D in philosophy and formerly taught the latter at NYU and Baruch College in NY.

This artist can be reached via e-mail: [email protected] 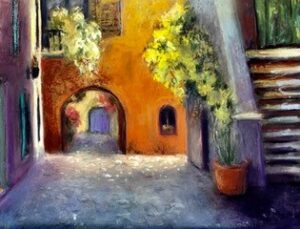